Ray Barnett, who overcame incredible obstacles in his own life before launching the world-renowned African Children’s Choir back in 1984, is on a mission to inspire the next generation of Christian pioneers through his autobiography ‘Don’t Tell Me It Can’t Be Done.’

The book tells the heart-breaking story of how as a young boy he struggled to find his way through immense poverty, family secrecy, learning difficulties and war-time suffering that gripped his life in Northern Ireland.

But it was his dramatic conversion as a young teenager that turned his life around:

“When I became a Christian at the age of 13, I was inspired by the ministry of David Livingstone. But the first time I attempted to preach I fainted.  The next day I read in the Bible that with God nothing is impossible. So, I never let anything stop me for pursuing my dream to help others because I always believed God could do anything.  I want to encourage people through this book that with prayer and action they can accomplish anything in their life.”

The book begins in a very tense moment in Ray’s life in 1987 when he was meeting with a notorious leader of Hezbollah while seeking to negotiate the release of hostages in Lebanon.

This dangerous work was part of Ray’s Christian human rights organisation he’d established in 1972 called Friends In The West. Through this organisation, he was able to coordinate many vital aid missions and secure the release of countless persecuted and imprisoned believers throughout the Middle East, Eastern Europe and Africa. 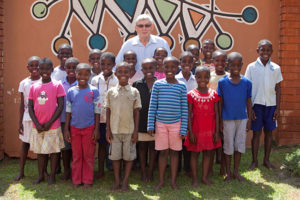 In 1984 while seeing the extreme famine and conflict devastating millions of children in Africa, Ray was inspired to launch the African Children’s Choir. He stepped out in faith to do what no one had ever attempted before – even his closest friends told him it couldn’t be done. His vision was to take a group of these deprived and orphaned African children, train them to sing as a choir, then physically transport them to countries like the US and Canada to perform concerts and share their stories in churches.

The African Children’s Choir through Music for Life has now educated over 52,000 children in seven African countries.  Hundreds of thousands of lives have been impacted by Music for Life’s international relief and development programmes over the last 30 years.

Ray concluded by reflecting on the legacy of launching the choir 35 years ago and how he hopes his story will inspire the next generation of young people to overcome their own obstacles in life:

“Many of those founding choir members are now doing great work across Africa and beyond as doctors, lawyers, teachers and UN workers.  I hope this book will inspire many more African children to fulfill their God-given potential and never give up on their dreams.”

To find out more go to: raybarnett.com

Ray Barnett, African Children’s Choir Founder, was named Olomunyak, which means ‘Blessed One’ after being crowned Maasai elder at a ceremony in Narok.

The 82-year-old of Irish descent was acknowledged for his contribution to the improvement of the lives of Maasai children. His crowning also signified his integration into the culture and rites of the Maa community, and in particular the Siyapei Area Community, despite his race.

“I am honoured to be integrated with the Maasai, whose cultural beliefs and traditions have added to the wealth of Kenya’s heritage,” Barnett said.

The African Children’s Choir programme promotes the beauty, dignity and unlimited ability of the African child around the world, providing for the children’s well-being and quality education by utilising the transformative power of music.

The children have been able to perform at historic events, such as 46664 AIDS Awareness Benefit Concert in honour of Nobel prize winner Nelson Mandela in 2007. They also performed for Her Majesty, Queen Elizabeth II, and Ugandan President Yoweri Museveni at Commonwealth Day in London, England.

Alicia Keys sang with the choir at Black Ball Gala in 2009, and in addition, the choir has also performed alongside renowned celebrities, Jars of Clay, Michael W. Smith, Roger Whittaker, Maria Carey, Wycliffe Jean and Will Smith.

Article courtesy of The Star

If you would like to interview Ray re this story or his upcoming autobiography, please email him at ray@raybarnett.com

The African Children’s Choir returned to New York City Thursday night for a special performance at the ninth annual ChangeMakers Gala. The gala is the ACC’s signature fundraiser, complete with dinner, music, and a live auction.

City Winery played host to the cozy evening led by Malin Akerman, wearing Brazilian designer PatBo, with her fiancé Jack Donnelly. Akerman had met Ray Barnett, the African Children’s Choir founder, when she was on location filming for The Bang Bang Club and saw the choir on their home base.

“They’re talented, they’re beautiful, and they have this excitement and this joie de vivre that shines off of them,” she says of that first performance. “I was blown away.”

The actress has been friends with the ACC since that initial meeting a decade ago and attended her first ChangeMakers Gala last year. As this year’s host, Akerman said the power of social media was incredible in gathering donations and spreading the word to friends and fans alike.

“It’s also about inviting friends here to experience it,” she said. “Once you experience the kids . . . when you are immersed in something, you are so much more inclined to give.”

Akerman said the incredible sponsors (Tito’s Handmade Vodka, Sony, and S’well Bottle) made the evening possible. “They are helping us out so much, and the proceeds are really going to where we want them to.”

In between the lively and heartwarming performances, guests also learned about Empower International Academy, a new secondary school currently being built in Uganda. The school will provide education to 400 students, with the goal of sponsoring 200 children who come from economically disadvantaged circumstances.